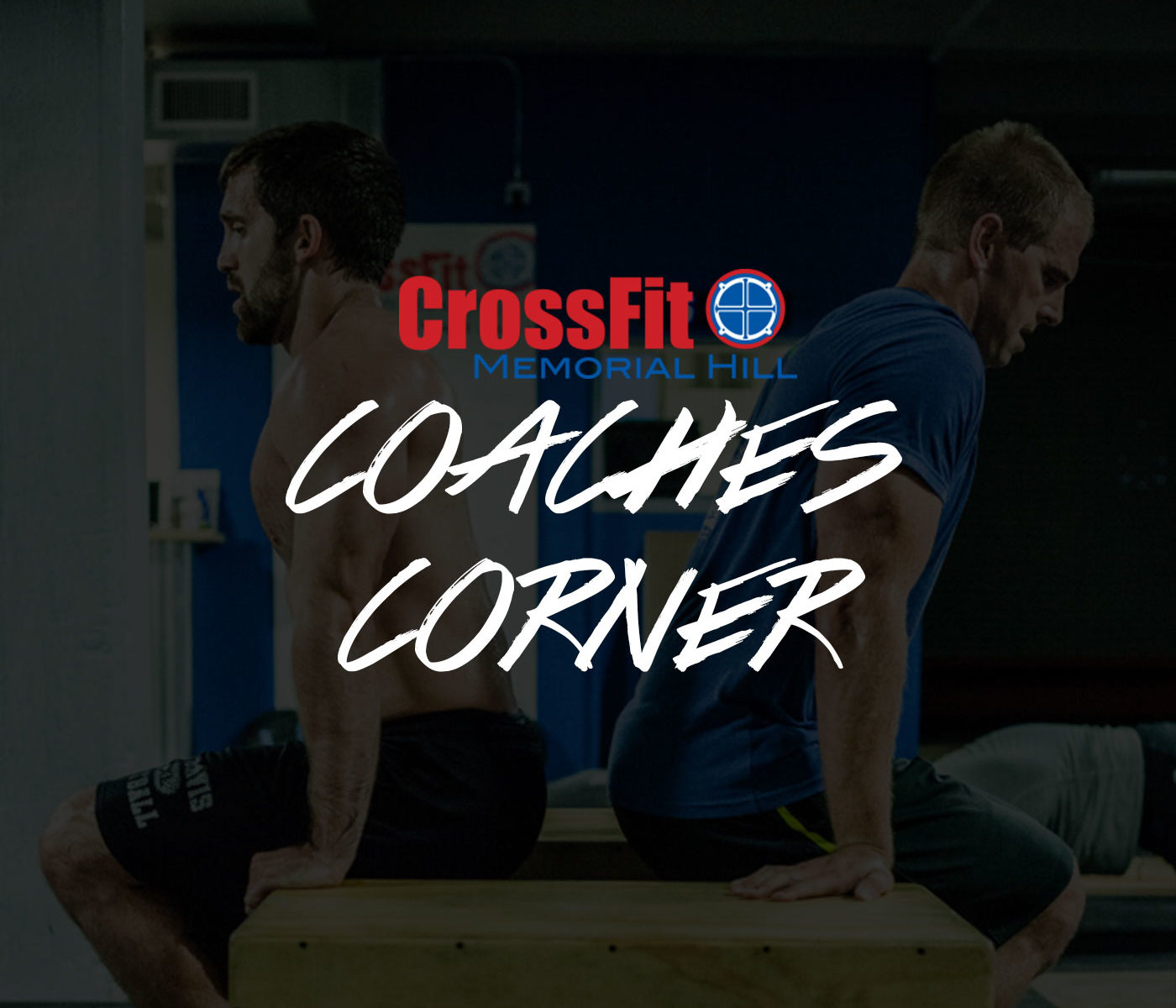 Your barbells have given you so much. It’s time to give back.

Maybe it’s because it’s been exactly a full year since I began CrossFit, but it seems like I’ve been on the receiving end of this question quite a bit lately. And every time it makes me laugh. Mainly because it’s asked in such a way that you would ask a person if they were still into their boyfriend or girlfriend. Almost like CrossFit and I are in this committed relationship, go on dates, and argue about the toilet seat being up.

I’m sure most people that have been CrossFitting for a while have been asked this question at some point and like me their answer without fail is probably always an enthusiastic yes. But I get why it’s asked. I really do. After all CrossFit has more social stigmas attached to it than NASCAR and smoking combined. And we don’t help ourselves either when we talk about OHS, 1RM, EMOM, HSPU, DL, CTB, AMRAP, T2B’s, DU’s and “the Girls” like we’re on the set of Windtalkers or something.

But someone smarter than me once said, “Don’t judge me until you’ve walked a mile in my shoes.” And while the only time we ever actually walk in a workout is on our hands, if you’re thinking about trying this whole thing out because it’s that time of the year for positive change, perhaps my observations from the past 12 months can alleviate some of the apprehension that comes with trying any new activity. And I’ll add that the first time I stepped into CrossFit Memorial Hill for my first community workout, I didn’t know a soul, and had never tried a single CrossFit class before. So here we go:

1. Each one of us looked like a baby giraffe on ice our first day (and occasionally still do).

If there is one thing CrossFit is, it is humbling. No matter what kind of shape you’re in or not in, at some point you’re going to feel awkward trying out some of these movements. The only way to fully embrace this sport is to lose your ego and accept that the forty year old woman next to you may be able to kick your ass in a workout. It truly is a process that as you develop your skills and listen to the coaches, you will find yourself doing things you never thought possible. And you will struggle with things too. My toes to bar are still horrendous on an epic level. But it’s going to be an awesome feeling when I finally start stringing them together. The saying “A journey of a thousand miles begins with one step” is the most accurate way to define the CrossFit journey. But you have to take that first step. The gym community will guide you from there.

2. The gym is a community, not a cult, but I wouldn’t be offended if we were called a gang.

We’ve all heard it. From multiple places. “All CrossFit people do is talk about CrossFit and hang out with other CrossFit people.” This is a total fallacy. It’s not ALL the time, more like 90/10. But seriously, you could say that about anything people are passionate about. “All musicians do is talk about music and hang out with other musicians.” Our gym community genuinely enjoys each other’s company, and we have each other’s back. That being said we don’t all live in a commune, and we generally go our separate ways when we’re not at the gym. But when we are there, we truly are a team. And the purpose of any team is finding a greater strength as an individual, one that you may not have known you possessed, because your team is there to support you. I’m not saying everyone you meet at the gym is going to be invited to your wedding (although I can say with 100% certainty that you wouldn’t regret it). But you will become friends with some of these awesome people. And in there lies the why I think this sport has grown so quickly. You get to workout with great people and socialize at the same time. Much better than running on a treadmill with your headphones on. However, like with any family, you get what you give, so don’t be shy and reach out to someone if you’re just starting out. They just may end up being a friend for life.

My job allows me to travel the country and I’ve been fortunate enough to workout in some of the best boxes in the CrossFit community. What I’ve learned is that walking into a new gym is pretty much the same no matter where you’re at. A 135 pound barbell is going to weigh 135 pounds whether you are in Kansas City or San Francisco. It’s what you’re taught to do with it, and more importantly how you’re taught is what makes all the difference in the world. And without reservation, I would put our coaches on the same level as some of the top instructors in the country due to how they explain the movements for functional fitness, as well as their diligent quest for improving their knowledge base. This hunk of flesh and bone we carry around while on earth is a phenomenal, sophisticated and sometimes frustrating piece of machinery. And it can move in a million different directions. So ask the coaches questions. Ask them why, how, when and what. I promise they enjoy being there and they take great pride seeing your progress.

Anyone that has visited other CrossFit boxes around the country probably already knows that we have a world-class facility that we call “home” at The Hill.  It’s one of the largest CF spaces in the country, outfitted with tons of top notch equipment that we get to play with daily.  Yet, in my mind, that is not what makes CrossFit Memorial Hill so unique and such a special place.  The Community…the people…more specifically, each of you reading this…is what truly separates The Hill from just another gym in my mind.

There are days that I’m completely blown away by the atmosphere inside our box.  In fact, it’s most days.  As a coach, it’s such an amazing feeling to look around and see brand new members getting pointers from one of the original, fire-breather, athletes…Or to see the first person done yelling and cheering for the absolute last person, clapping for them as they finish their last few grueling reps…or watching two strangers, drenched in sweat, peel each other up off the floor and help each other put their equipment away.  I could write example after example, and each one makes me more proud than the last.  You all make this place so special in that way…so keep it up!

If you have no clue what I’m talking about, and you’re just into CrossFit for the workout alone, then I think you are missing out in a huge way.  Some of my closest friendships have been forged within the walls of CFMH.  You can help to shape your experience here.  Show up early, say hi to folks, learn people’s names, welcome new members with open arms (chances are they are nervous and  even a little scared), be encouraging, share tips (WOD tips, nutrition tips, or, hell, even tips about where you get your hair cut for that matter).  Chances are, you can get a good workout in at any globo-gym/fitness chain in town, but rarely are lifelong friendships made there.  The person on the treadmill next to you at Planet Fitness probably isn’t going to call you if you don’t show up tomorrow.  And I don’t know about you, but I’ve never seen someone pick up some dumbbells to do the final few reps of a bicep workout, in unison, with the stranger next to them at Lifetime Fitness.

Ultimately, this Community was created by each and every one of you.  We are a young gym, celebrating our 1 year anniversary next month, but the relationships formed inside the walls are very real.  It’s because of all of you that I absolutely love being at The Hill each day.  Whether I’m teaching a class, or working out next to you, it’s always one of the best parts of my day.  Keep contributing to that…continue to do your best to make it an even better community than the day you first walked in.  It’s your Community, folks.  All we did was outfit a cool space…you guys and gals did the rest.  Thanks for being so awesome to each other!